​On 8th August 1967 a devastating flash flood hit the Lancashire village of Wray. Many buildings were destroyed or were left uninhabitable and had to be demolised but despite the raw power of nature being unleashed on the village on that fateful day, miraculously noone was killed.

The River Roeburn flows through Roeburndale past Backsbottom Farm on its way to Wray. This is where the Middlewood Trust is based whose mission it is to advance research and provide education for public benefit in techniques of agriculture, forestry, wildlife and countryside management, building, energy conservation and human lifestyles which are in tune with the natural cycle.

I am resident artist at the Middlewood Trust and this past weekend I took part in the River, Remembering, Restoring Festival commemorating the flood on its fiftieth anniversary.

We based ourselves by the ford over the river right down in the valley and overlooking the ruins of the original farm destroyed in the flood, I set about makimg something to mark the occasion.

I found a large branch further up stream which would have been deposited there after the last time the river was in spate then struggled to erect it on the bank so I can suspend things from it.

It rained off and on but the river level seemed to stay steady as the run off from the day before's rain relented and the new water maintained its height. Once the showers stopped in the afternoon I could see that the level started to go down.

Working intuitively as usual, what I seemed to be making only started to become apparent as I neared the end. Now people were coming down from their gathering further up the valley track and sat down near me as I attempted to finish the sculpture, amongst them were Mark and Bryony who were making a film all about the flood and our festival.

In order to try and get some tension into it I started to tie the bottom rings down to pebbles in the water and as I added more and more it started to become clear that this sculpture was all about rain and the water cycle. Now in late afternoon, when they had been invisible all day, the sun now came from behind me and hit the sculpture front on to illuminate the strands of rush grass as though they are rays of sunlight emerging from a cloud.

Eye witnesses on the day of the flood said that the sky turned all sorts of unusual and surreal colours: purples, dark blues and greens and if you were at all religious you might think that the end of the world was coming.

I've titled this 'Cloud Burst' and I feel it speaks of the sucking up of moisture into the air and rolling it around until its fury is unleashed back from whence it came until the last playing out of the drama is that moment when light bursts out of the darkness and sharp rays of light like shards of glass change the scene from one of violence to one of awe and beauty. 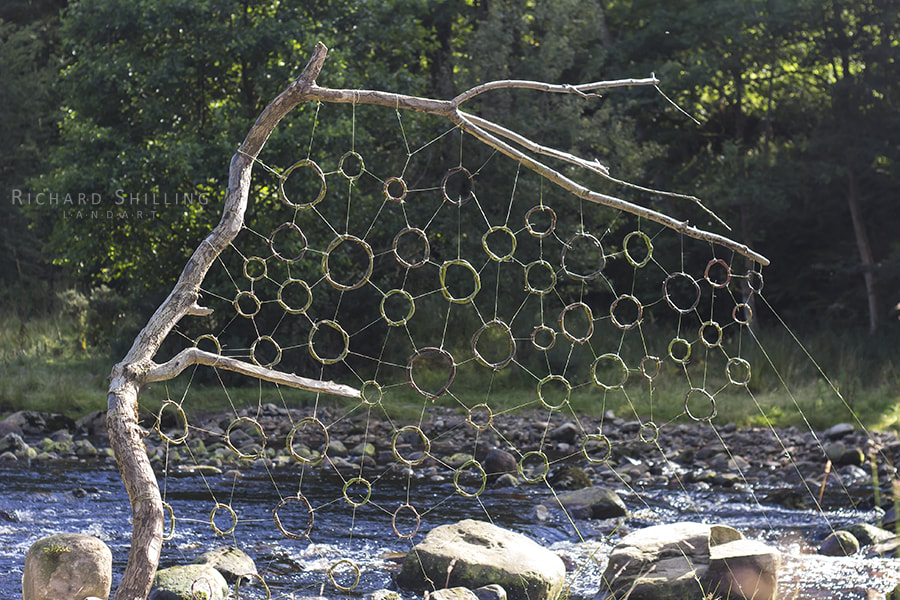